Mirror, Mirror, on the wall, who has the fairest kingdom of them all? Well, Matt Gambell wants us to know just that! He's created a game that brings us RPG lovers closer to our inner god complexes as he combined the brilliance of tycoon games and the genre of RPGs.

Check out the press release bellow, along with several screenshots!   Are you sitting comfortably? Then let me begin. Once upon a time there was a solo games developer named Matt Gambell who dreamt of combining classic tycoon gameplay with Kingdom management. Many, many man hours later and following a spell in Early Access Matt’s dream has been realized with the full release today of  RPG Tycoon for PC & Mac for just a couple of gold coins (£6.99/$10). Come journey with us to the land of RPG Tycoon courtesy of this new trailer.

Start with a single plot of land and limited funds with which to hire the services of your starting Heroes before sending them on over 30 quick and 60 epic quests that, should they be successful, will see the fame of your kingdom grow.

This fame in turn attracts settlers from surrounding towns who will be looking to spend money in the shops and on services you add to your kingdom. Watch those coffers begin to fill – at least for as long as you keep those settlers happy, so don’t forget to increase its ambiance with some well placed trees or decorative items. Who doesn’t like a fountain? You won’t be alone in your ventures as competing AI governed kingdoms will also be vying for the highest score and to be awarded the title of ‘Greatest Kingdom in All the Land’ Matt has created RPG Tycoon to be modded with ease, so with just a basic knowledge of XML or image editing software players can create and share new quests, heroes, buildings, items and more in no time at all. 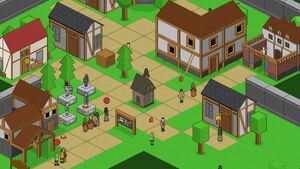 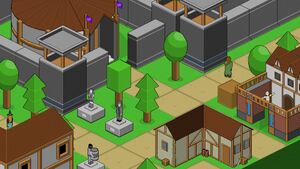 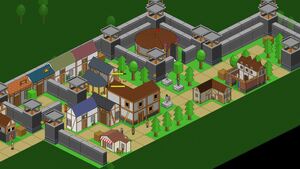