Asphodel Complex RPG Is Up On Kickstarter 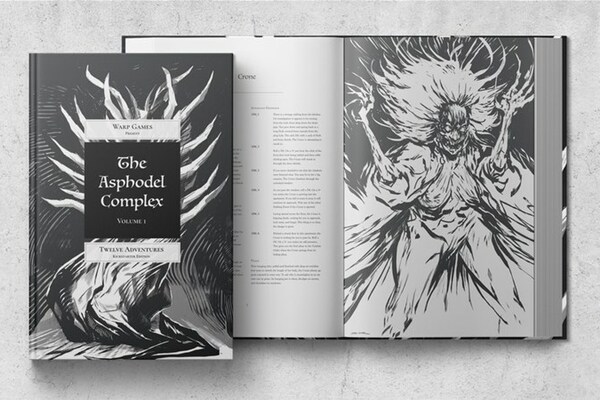 The Asphodel Complex is an RPG designed for both new players and veteran gamers, with an emphasis on quick-play.

This is a game for Game Masters (GMs) of any experience level, designed to be accessible to players who may be entirely unfamiliar with Table Top Role Playing Games (TTRPGs). Character creation is optional and should take no longer than five minutes. Character progression is commodity-based, meaning there is no need to track or accrue experience points or comprehend sprawling research trees. Instead you become more capable by purchasing or collecting objects from your environment.

The game is up on Kickstarter now.

The Asphodel Complex is not particularly coherent in any way. There are small pockets of space that seem as though they might be commonplace, but then you open a cupboard door that opens up into a vacuous vaulted room. Or try and pass through a window into what seems like a brightly lit backyard only to find yourself tumbling down a pitch black shaft and crashing through the ceiling of the same room you had initially crawled out from. The uncanny nature of the complex is all a GM should need to herd their players within the confines of a campaign setting.

The built spaces are not to be underestimated, for the most part they are the Greek chorus that foreshadows and speculates on the state of the narrative. If a passageway is blocked, feel relief at having been protected from an untimely demise. On the other hand, sometimes a bizarre and shocking observation may seem to be a warning but will pan out to mean nothing at all. These red herrings help to keep the walls entertained for although these places are mostly silent witnesses, it is important to emphasise mostly silent witnesses. Unfortunately, in the Asphodel Complex when these relatively mundane things are overshadowed by the wild and fantastical, they can often devolve into twisted situations where the setting will want to usurp the position of plot and main characters. The best thing to do is simply focus attention away like one would a child and also recognise that each setting acts and reacts differently, some are more benign and integrated as is the Greek chorus of Sophocles and others biased and meandering as in the plays of Euripides. Mostly, the best course of action is to allow the flow of the setting to wash over as constant vigilance can shift focus away from the overall narrative. Be sure not to play into the hands of space.

The campaign is up and running now. It's set to go to the end of June.