That's right, I started with the video this time. Because there is no end to how many times I can watch that video. The Elder Scrolls MMO is nothing like I have ever experienced before, being both a console gamer and a HUGE MMO buff all I have to say is this game plays like no other MMO I have ever tried before.

Though I find it absolutely amazing my fiance is the bigger Elder Scrolls Buff finds that in a few areas they've made some cuts in terms of gameplay you'd usually expect in the console games, however the little bit of differences in order to play it in a massive online world seems to weigh in our favor. Finally, a game to bring us together! They've recently announced their Imperial Edition for the ESO MMO, and if you are MMO buffs or Elder Scrolls fanboys/girls then it's something you won't want to miss.

I'm going to be broke if they keep coming out with statues for my favorite games. 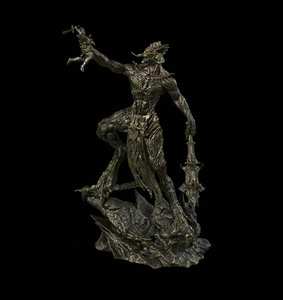 The Daedric Prince can "enslave" me any day. I mean, what a statue!

This comes with the Molag Bal statue which is a 12" statue featuring the Daedric Prince of domination and enslavement, with of course, someone in his hand being enslaved or dominated. Either way, win in my book. With this you will obviously get the classic map of Tamriel, that details the zones controlled by the different alliances and of course the ultimate goal which is Cyrodiil.

Last but not least you will get Emporer's Guide to Tamriel which is a 224-page illustrated guide annotated by the Imperial scholar, Flaccus Terentius. Anyone who got the Skyrim collectors edition will know the great quality that previously has come out of these collectors edition, however those who did not pick it up I have just one thing to say: You are missing out, don't miss it this time if you can afford it. I am going to korea to sell my kidneys now. Along with this and what is also included in the digital pre-purchase version is the "Play as an Imperial" which is an exclusive to these pre-orders that allow you to play in any Alliance as an Imperial, gain unique bonuses, crafting styles, gear, and more.

Including a White Imperial Horse, Mudcrab vanity pet, and rings of mara that you give one to a friend and when the both of you play together you gain an experience boost and an overly-attached MMO playing buddy who may just called you up at 3AM unable to sleep and need that "extra experience." Along with the pre-order bonus and explorer's pack you will get a 5 day early access to the game this is only available for people on PC or Mac, sorry console players! Though never fear if you pre-order the regular edition that pre-order gives you 3 days early acces. As well as play any race in ANY alliance! This alone has got me at the edge of my seat counting my pre-order dollars, scuttler vanity pet. Which. is insanely cute.

Aside from that the last but not least Bonus Treasure Maps! Which will lead you to hidden chests full of loot. So happy gaming and may all your chests be full of the best loot!