While we didn't see any official announcement about it on WizKids or HeroClix.com, it seems that the awaited The Lord of the Rings HeroClix will be available at the beginning of December. Which is sure, that it wasn't released on the officially announced announced release day, November 23rd.

Based on some online retailers, the new release date is December 7th.

For those Lord of the Rings fans who don't know the HeroClix brand, it is a collectible miniature game by WizKids. The miniatures represents different characters, and the players could form teams for a set point value (the most prominent are 300 point teams) to fight each other. Most of the statistics and wounds are represented on the dial of each figure's base, while special abilities are detailed on the respective character card. Each figure have a point value which counts at team building, with more powerful figures costing more points for game balance.

The HeroClix miniature product line is primary based on Marvel and DC superhero comics, but they have ventured to other brands to produce miniatures, which are both compatible with each other thank to the common rules. Current products include above the already mentioned are very varied, based on comics (Hellboy), and computer games (Street Fighter, Halo, Gears of War) and films (Watchmen, Jonah Hex). The miniatures in HeroClix are prepainted and nicely sculpted plastic miniatures. 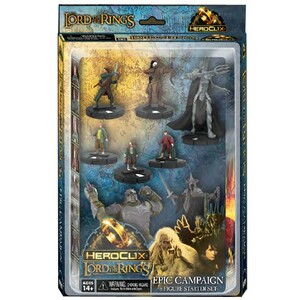 The Lords of the Rings HeroClix

Of course, the Lords of the Rings is about much more than combat, so WizKids created several rules for the LotR HeroClix to represent this. In the starter set they include rules for campaign game, which is moch more suited for the LotR experience than simple combat. Many of the new figures about iconic characters will have epic abilites, representing their unique talents, like Gandalf's "You shall not pass!" and Boromir's "Horn of Gondor" ability.

The Lord of The Rings HeroClix line will consist two different products : a starter set, and single figure boosters. The starter consist 8 figures (Ringbearer, Strider, Esquire of Rohan, Guard of the Citadel, Captain Lurtz, Olog-Hai, Sauron and the Witch-King of Agmar), six maps, 2 six-sided dice, lots of horde tokens to represent orcs, riders of Rohan etc, and a rulebook.

On the other side, the boosters will randomly contain one of the 21 different figures produced for the game, like Boromir, Faramir, Gandalf, Ringwraiths, Saruman and most other iconic characters available.

As I'm both a fan of Lord of the Rings and the HeroClix products, I really hope there won't be any more delays.