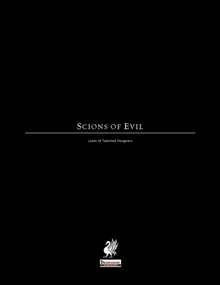 On last week Raging Swan Press released a great collection of villains and minions to face heroes in any Pathfinder campaign. On it's nearly 200 pages, Scions of Evil offer enemies for any adventuring party from lowly kobolds to the irresistible force of a balor lord.

I think that we can't have enough ready to play enemies around and while we already have a lots of them from another sources (including Paizo's own releases) Scions of Evil is an excellent resource for a game master. From universal characters like bandits or goblin raiders to unique villains and evil groups there is everything to create opposition for our players.

I have to note that Scions of Evil is a compilation from earlier products of Raging Swan Press, including Bandits of the Rampant Horror, Brethren of the Crimson Altar, Fellowship of the Blackened Oak, Kai’s Scoundrels, Thanegar’s Horde, Villains, Villains II and Villains III. It's also include about 20 pages of new material.

Apart from the introductory pages (including a Stat Blocks by CR table), the book includes free major parts. The first and smallest part contains useful minions and "random enemies" like bandits, mercenaries, assassins, gnolls and many other. I guess these NPC-s are the easiest to include in an ongoing campaign.

Of course, if you are looking for something more unique the second and third part of the book offers unique villains and ready to play villain groups, and while some of them maybe more suitable as lieutenants, others are strong and resourceful enough to base a whole campaign on them.

Maybe thankfully to it's multiple authors, Scions of Evil features a great variety of villains from great manipulators to stubborn warriors, a wizard looking for lichdom and even more exotic opponents like a demilich druid trying to terraform the continent to something dark and dangerous, or a halfing antipaladin disguised as a human child. You may find an appropriate enemy for every purpose. And what's even more important, all of them have their personality and motivations detailed, so they won't be just a bunch of statistics on a paper.

As I mentioned the book also contains five complete villain organization, most of them suited for medium or high level adventuring parties as an opposition. These groups include the following : Bandits of the Rampant Horror, Brethren of the Crimson Altar, Fellowship of the Blackened Oak, Kai’s Scoundrels, and Thanegar’s Horde. Again, motivations an personality for every major character is detailed, as well as combat tactics employed by the group. Often the objectives of a group is not the same as for some of its members, which could offer many opportunities for the Game Master or the players.

All in all I think that Scions of Evil is an excellent collection of evil NPC-s, which is very useful for any Game Master. Of course, if you have every earlier release from Raging Swan Press then the additional content maybe won't be tempting enough to secure a purchase, but if you don't have them I really recommend to get this.

For those who want to get Scions of Evil it's available on RPGNow on this link.