Shiness: The Lightning Kingdom is a bit of a typical rpg carving out its own little slice of RPG Pie. The game brings me back to my airship days aboard Skies of Arcadia but with less airship than that. Though there are many indie game design companies out there looking to step into the RPG market, this one gave me a bit of nostalgia while still bringing me something a little new.

Shiness has a very in depth combat system that is difficult to master but satisfying all the same, though it had a lot of kickbacks to older RPGs it brought a new depth to them as well. The game is based in a very anime/comic-esque style which, actually includes it’s own comic on their site. No worries, no spoilers, it’s a great read before the game!

The game doesn’t have the highest level of graphics, in fact my favorite part is some of the background/surroundings, where otherwise there’s a bit of a polygonal type feel to the character models.

Of course the game is about battling the ultimate evil, after crashing that is. Defeat the evil to save the entire UNIVERSE or, well, button mash. Though that won’t hold you forever, you will need to learn to master the games combat or you’ll find yourself in a pickle. The game isn’t open world, but definitely not linear so you can go back to locations you have already been in, which is handy in taking on new paths that you unlock or finding secrets you may have missed.

The game does have a puzzling element to it (get it? GET IT!?) that progresses from flipping levers to a much more complex pushing stones (hah, no it get’s harder than that…kinda). The game could use a little refinement, but just after a bit of fine tuning it could be in a pretty decent running in the RPG market. Skyrim here we come!

Maybe not Skyrim, but definitely Kingdoms of Amalur. (Don’t get me started on that bitter disappointment.) The story is interesting and kept me engaged, however the camera seemed to be a bit of issue that drew me out of the narrative and gameplay at times.

Overall not a bad game, a bit of fine tuning could really bring this game to the next level! 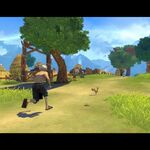