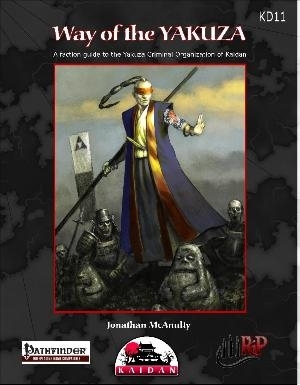 About two weeks ago, Rite Publishing released a new sourcebook, Way of the Yakuza for Pathfinder. Now we have the chance to look at the book in full detail, and share our insight about our findings.

As you may already know, Way of the Yakuza is designed for the publisher's own Japanese ghost setting, Kaidan. Luckily the content therein could be easily adaptable to any campaign which features the yakuza, but some elements are usable in completely different settings too.

After reading trough the book, it seems quite surprising that it's only 38 pages long. The sourcebook is filled with a lots of material, and I have to say most of it's is really good.

The first part of the book is dealing with the history of the yakuza, and how is it works. This part is quite detailed, and it's flexible enough to insert into most Pathfinder campaign. It's flow is really feels logical and well thought, so I will happily use this chapter if I need some background on these groups. The detailed traditions and the way of life of these criminal groups are easy to understand, and really gives it's distinct traditional feel as it should. The small text-boxes through the book detailing various customs adds a lot to this too.

However the much more universally usable part of the Way of the Yakuza is the gaming information in part 2 of the book. In this chapter we could read suggestions and rules to create and play characters involved in yakuza activities. With new traits, class archetypes, feats and a new prestige class, the offered character options seems mostly balanced and are nicely fitting to the setting. There are five new class archetypes included in the book: the Moso (bard), the Yakuza Bushi (fighter), the Bakuto (rouge), the Kyodai (rouge) and the Horymio (wizard). All of these have a really unique feel, and innovative abilities.

The Moso are blind performers, concentrating in religious songs and driving away evil spirits. The later in game terms mean that they are able to damage undead with their song, and even use dismissal from 12th level with their performance. Their blind "ability" seems interesting, as they receive a much more enchanted hearing as a compensation, but I'm not sure how successfully would it work in actual gameplay. Maybe they are more suited to be colorful NPC-s than a player characters.

On the other hand, the Yakuza Bushi and the Kyodai are the warriors of the yakuza clans. The first is mostly suited for elite bodyguards and front-line warriors, while the second is suited for "brutes" of the  clan, used to work together as a group, and intimidate as needed. I think the Yakuza Bushi is also suitable for ashigaru bodyguards and other non-samurai fighters of the east.

From the five new archetypes, I think the Bakuto is the most universally applicable to any campaign. They are perfect for any character, who is a gambler, and not somebody used to evade traps. They abilities in gambling and cheating are unmatched, but they don't receive the trap sense and trapfinding abilities of a "default" rouge.

The Horymio is another very unique archetype after the Moso. They are the occult tattoo artists of the setting, using various tattoo instead of a spellbook and even instead of arcane bond. They keep tatoo on scrolls, and copy them to their skin temporary to cast spells. At higher levels they are able to produce tatoo even to substitute scrolls and wondrous items.

The only prestige class in the Way of the Yakuza is called Machi-Yakko, and it's suited for the well respected leaders of a yakuza clan. Their abilities revolve around leadership (diplomacy, followers) and completed with some rouge abilities and unique magical tatoos. I think this class is really a hit on the mark, depicting these leaders both formidable in combat and in social interactions without being overpowered.

The chapter is rounded up with several feats, equipment available to the yakuza, four spells, and a handful of magical tatoo. There are too item creation feat to replace single-use and wondrous items with tattoo, and some more universal feats. Short Blade Warrior for example cold appear on many character sheets, if the Game Master approve it.

The third part of Way of the Yakuza give us rules to create a new yakuza clan from scratch, if it's needed for a campaign. Some of the statistics could be random generated, while others (for example the level of the clan leaders) are not. It's really interesting, that the alignment and the qualities of the clan are affecting such things as honor, morale and the purchase and smuggling capacity of the criminal group, which in turn have their effect on several rolls and interactions. The role of the second in command also has an effect on the clan's capabilities, as an accountant gives different bonuses than an enforcer. This part, again, is applicable for other criminal enterprises too, not just a yakuza clan.

The fourth and last part of the book deals with the village of Zawamuzi, a mountain village under yakuza control. This place is really suitable to lead a Pathfinder campaign there! We could read detailed information about the important persons of the village, a lot of background material for the Game Master, and numerous adventure hooks, which could easily ending with the players face the local yakuza. And beating the yakuza on their home turf won't (and shouldn't) be easy.

At the end I really feel that Jonathan McAnulty and Rite Publishing made a very good work with Way of the Yakuza. If I have to give it a point value I would say 4/5 with the 1 point deducted mostly because I feel part 3 and 4 a little bit incomplete. But maybe 4,5/5 would be more appropiate.

At the end, I really recommend this book. You max purchase Way of the Yakuza at DriveThruRPG here.